On a gray, wet day during the summer season of 1989, I took a cab up the steep hill to the Seoul campus of the Dongguk University. The name, approximately a rhyme with “sung book,” was derived from Chinese dong guo, or Eastern country, which to me meant Bodhidharma bringing Zen Buddhism to East Asia. The temple and shaven-headed monks in traditional monk’s clothes reminded me of China, where I had been happy and content. Also, nine years before I had begun flirting with meditation practice, reading books and occasionally talking with someone. I longed for more, but had begun to understand that serious meditation was too difficult to do on my own. Perhaps here my professional life and my spiritual life could come together.

The English Department was interviewing me for its position as the native-speaker Visiting Professor, which required twelve hours a week in the classroom—possibly with paid overtime. There was five months’ paid vacation. My previous gigs had all been at universities, except for the current job at a private language school, where I was teaching a split shift of twenty-five hours a week, ten months a year, and tearing my hair out over decisions made with an eye to the bottom line, not language learning.

Years later, I came to understand that at least the language school gave me was a bit of empathy for my sisters and brothers who were then laboring away for thirty-six hours a week in the classroom, usually without legal recourse should the school owner decide not to honor the contract. Their salaries were lower and taxes higher than at universities.

“You are our top candidate,” my future colleges informed me.

I said that although I already had a Ph.D. in a related field, I needed to finish my master’s degree in linguistics and Teaching English as a Second Language. I’d planned to return to Pittsburgh after a year in Korea, but it would be possible to write the thesis in Korea.

“Why don’t you send a telegram to your thesis advisor?” they asked.

I did, explaining that although I didn’t think this was the job of a lifetime—little did I know—it looked pretty good. Could I anticipate graduate student employment back home? A response came immediately: Take the job. I took it.

The language school job had come with a small furnished apartment. The Dongguk job offered no housing, but Prof. Kim Han, my new department head and a warm, motherly woman, made arrangements for me to live in the International House in the Korea Research Institute, where for several years I had a quiet double room with bath and maid service for about $220 a month.

The English Department office was staffed with graduate assistants who could look after me and take care of whatever routine tasks presented themselves. My colleagues proved to be friendly and supportive, and I developed the same sort of professional relationship with them that I’d had with colleagues in the States.  I was given a private office larger than the apartments of a great many Seoul inhabitants, where I could look down on to the beautiful, lifelike bronze-green statue of a baby elephant perched on a four-meter-high pillar. 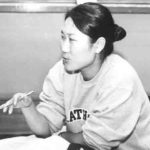 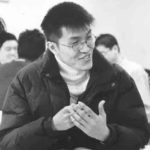 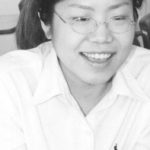 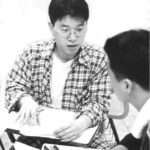 The students turned out to be friendly, very bright and highly-motivated. Half of them worked hard, and half were somewhat lazy. Class size could be a problem. My first “advanced conversation” class had eighty students in it, with students at the back of the crowded room hiding under their desks when I looked their way. It was a circus. The textbooks I chose before classes began didn’t really meet the needs of the students. So again I realized that, like I had in China, I was going to have to put together the materials myself.

At that time, Korean universities had not yet begun to resemble American universities, top-heavy with administrators who made most of the decisions, despite never having stood at the front of a classroom. Dongguk seemed more like the German universities where my father had taught and where most of the decisions were made at the professorial level. Clearly, if I wanted to control class size and institute placement exams, I was going to do it myself. On the first day of the next semester, I stood in front of any over-crowded class and said, “Okay, everybody stand up, take your books and follow me.” Then I marched them over to my office and let most wait outside while one at a time I administered a brief conversation test. “What is your major? How did you get to school this morning? Why are you attending Dongguk University?” I listened to the answers, of course, but often I knew whether the student was advanced conversation material before she or he said a word. The comprehension in the eyes—or the lack of it—was enough.

At Dongguk there was less culture shock than in China. My classes met at the same time every week, there seemed to be a set number of people in the department—no strange individuals breezing in—and communication was relatively easy. I had already become used to metropolitan Seoul, a huge fast-paced city of concrete and subway lines and computers. If anything, I had begun to look beneath the modern surface for the Asian culture I’d found so intriguing in China. Perhaps the Buddhist side of my new circumstances would reveal it to me.

But there were rough patches. While Westerners tend to plan excessively, Asian establishments are much more likely to build the airplane in the air—just try whatever seems like a good idea at the time. I’m thinking of an incident several years later, after the administration had decided to run things. Someone thought it would be nice to remove the restrictions on “advanced conversation” classes in foreign languages. On the first day of class there were maybe 200 students seated in my classroom, 150 people standing with no place to sit and others out in the hallway. I turned to two of my former students and said wryly, “Why don’t you go over to the English Department and ask Prof. Choi what I’m supposed to do now?”

Then I passed around some papers so the students could write down their names and ID numbers, which told me what year they were in. I eliminated all but the seniors and promised the others priority for the following semesters. That gave me 45, which with my usual drop-out rate became 32, or eight conversation groups of four. Quite manageable. I let the two juniors who had helped me stay in the class, but I spent the entire semester battling the administration. Some pencil pusher had seen the pattern and wanted those two juniors out. Eventually I had to tell the kids that if they enrolled the following term I would give them their grades at the end of that term. When the official class roll finally arrived, it had 595 names on it. I heard the Japanese native-speaker had three or four hundred in one class.

Anyway, at the end of the first semester and in typical Western fashion, I wrote a memo to my department head outlining a series of changes I wanted to make. The first thing would be for me to take over all the conversation classes. That would also save her the worry of trying to find a part-timer to take my overload every semester.

“I was pleased that you’re ready to take on the whole program now,” she said.  “But are you sure teaching nineteen hours won’t be too much?”

I had been feeling elated, but slightly guilty at putting in an estimated twenty hours a week at my terrific new job.  I only had to show up three days a week. On weekends I explored the Korea I hadn’t been able to see while working at the language school.

The advanced students were given placement exams during the first week of class.  For them I put together a booklet of short selections on a variety of issues to read before class and be ready to discuss-Korean reunification, drunk driving, moral issues, wilderness survival tactics, human rights, male and female roles. There were decision-making problems which could only be solved by consensus.  The idea was to keep them interested, keep them talking, give them a wide range of things to talk about and a diverse vocabulary to learn.  I planned to change the materials every semester since a large percentage of students took the class more than once.

By this time I had learned that most Korean students would not talk to the class as a whole, which is considered speaking “in public,” and therefore arrogant. But they would speak to each other in small groups. Unlike Japanese students and some Chinese, my Korean students hadn’t been intimidated into excessive shyness. And like most Asians they were socialized to be very curious about each other. As long as they had the language skills and appropriate topics, there was never a problem getting them to talk.

At the end of my first year, my department head said she’d like to take me to lunch.  She drove me up the hill to a nice international hotel which served kalbit’ang, or beef rib soup, which she knew to be one of my favorite dishes.  After we’d ordered lunch, she handed me an envelope.  “This is not very much,” she said, “but I want you to know that with it goes the heartfelt thanks of every member of the department. Some of the changes you’ve made we should have done years ago.” In the envelope was fifty thousand won, about seventy-five dollars at that time.  It seemed a bit strange accepting a bonus, particularly since I had felt what I was doing was only making my own job easier. But I knew this was the Korean way, and the emotions behind the gift were very clear. It gave me a wonderfully warm, somewhat choked-up feeling.

“I gather you’d like to stay on for another year or so?”

“Yes, I would. But sometime when it’s convenient I’d like to talk to you about the promotion schedule.”

“We’ll do what we can, but you know that the new Private Education Act gives the Board of Trustees the power to make decisions that were once made by the professors.”

A few months later my department head and my friend next door battled the administration, successfully, to get me a substantial raise. When the possibility of moving up to a higher-ranked school presented itself, I considered it seriously for about three weeks. I finally said to myself, “Look, you have everything here that you want-good students, supportive colleagues, control over class size and everything you do in the classroom.  Your working conditions are better than those of anyone else you know teaching in the country.  There ought to be a limit to what you are willing to sacrifice for prestige and money.”