In September 26, 2009, my housemate Mary and I were flooded out of our home in the subdivision of Xavierville I, Quezon City in Metro Manila. Now, a little over a year later, a typhoon has just struck the Philippines, but at least 200 miles to the north. I’m high and dry in my second-floor study in Xavierville II, which was not flooded last year. Still I’m monitoring Typhoon Megi—called Juan locally—and empathizing with its victims in Baguio.

When I was in the States this summer, I went to an outdoor theater with some friends. Right before intermission, the sky opened up and we were deluged. The audience began to leave, but one of my friends announced that she wouldn’t mind watching in the rain, while I expressed concern about the Canon EOS 50D which I’d bought to replace the four cameras I’d lost in the flood.

“You were more than just worried about your camera getting wet,” she told me when we were safe in the car. “You’re still traumatized.”

What could I say? She’s a good friend of twenty-seven years and an excellent therapist. She probably knows my state of mind better than I do, in the same way that I as a college professor could tune in to the mood of my classes—what they felt about the class work, whether they grasped the basic concepts, whether I was giving them too much homework. So I probably am still traumatized.

Mary and I were definitely still traumatized when we rented the post-flood house. I remember feeling grateful, relieved and humbled as we sat in the new landlady’s living room, with that deeply-shaded, interior cool you find in the tropics, admiring the beautiful antiques and the greenery and feeling like a refugee in donated clothing. I was anxious to get out of the expensive “student condo” and back to normal life.

Otherwise I might have reacted differently to the house she showed us in UP Village—half of a huge duplex, with office cubicles built for a previous tenant running all down one side and meager windows set high in the concrete walls. In my traumatized state I thought the office space was “a sign” I should use it for teaching, although without analyzing how rows of cubicles could make a classroom. The first floor was huge, but it looked a bit like a basement. Downstairs the tile had been removed from the living room and dining room floors, upstairs the wooden floors were warped with water damage. There was plenty of light upstairs, but the shutter-type frosted panes let the expensive air-conditioning out and the polluted air in. When the windows were closed, you couldn’t see out–driving the cats crazy–and when they were open all you could see was a metal roof. At night it was like sleeping near a campfire. There was a lot of old furniture discarded by previous tenants but stored there by the landlady because she had no place else to put it. For what you got, the rent was high.

My housekeeper’s reaction was saner than mine. “What kind of place is this?” Fe said. “I asked the landlady why she didn’t donate those single beds in the storage room. Some poor people could use them. But she said they were too big for their houses. How would she know?”

I was learning that holding onto possessions, hoarding, was part of the Filipino stereotype of the rich, which is what you’d expect in a highly stratified society with such enormous differences in income levels. 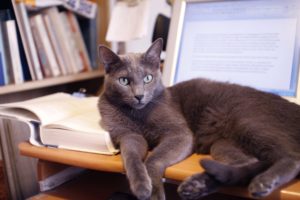 The neighbors on both sides were large, evangelical Christian families. Ironic, I thought, to come halfway around the world and find myself sandwiched in by Americans, my mind in a culture war. In Pittsburgh I’d seen my students overcoming the national and ethnic differences they arrived with: mainland Chinese becoming friends with Taiwanese and Koreans with Japanese. But here—early in the morning when the piano next door banged out hymns, I responded with Herbie Hancock or Stan Getz, although not cranked up as high as I would have liked.

We had moved in in October. In mid-November Mary went back to the States to be with her children. I stayed, mostly sequestered in my study, laboring away at the novel and wondering why I was still in the Philippines.

I moved as soon as the lease was up. I don’t mean to be ungrateful for what was indeed a refuge from the storm, but that house probably wasn’t the only possibility. It wasn’t until I was seated on the lovely balcony of my new house, admiring all the trees, that I realized the interim house—the rebound house, if you will—was just sad. And sad in so many different ways. Deserted. Decaying. Built to be utterly without charm, exclusively for a function it no longer served. Fe told me the new tenant had three cars and planned to park one in the garage and two inside, in the office space near the living room. This seemed oddly appropriate.

It was a good move. Almost everything but the furniture was boxed up in my Korean packing crates. One day Fe hired a jeepney and crew to move boxes, and my friend Ken drove up from Makati to haul boxes in his SUV. The next day the movers we had hired–and contacted many times–failed to appear. We located another company with a 24-hour answering service, and that crew showed up at eight the following morning for the furniture and appliances. Fe hired extra men to do any additional lifting and to clean the old house. The new house was clean and freshly painted when we moved in.

I’m now living in Xavierville II, the subdivision across the street from the old one, but on higher ground. Fe recommended the house after seeing it with the same real estate agent who handled the house in Xavierville I. Downstairs it has a combination garage and front porch, a long living room-dining room-kitchen with a lovely marble floor, a laundry room and a bath. Upstairs there’s a wooden floor, a small maid’s room—Fe and her husband Jessie say it’s sufficient, given that they also have their own house—a bedroom and a large master bedroom with bath which has become my study and exercise room. It opens up to the balcony with the trees. The house is well-designed, with built-in closets and cabinets and little waste space. The walls are dark cream or light beige, with light gray doors and white trim. The use of three neutral colors is really clever, as I discovered when I realized I could use both my pearl gray drapes from Korea and my pale yellow drapes from Xavierville I.

The transition isn’t entirely over. The garage/porch area still contains stuff from the old house that we’re trying to sell or give away. (If you’re interested I can give you a really good deal on an air-conditioner or electric stove.) Hopefully, it will soon be cleaned out. We’re adding a grill on the balcony so the cats can share it with me. It will also provide extra security, although there are two armed guards at the subdivision gate 100 meters away. We’ll line the downstairs porch and the balcony with plants like the neighbor has. Not an hour goes by that I don’t catch myself admiring something in my pretty new house.

The new subdivision has a pool which I’ll try after the weather settles down. If I prefer I can walk across the street to my old pool. There’s peace. There are coffee shops and restaurants within walking distance. The new neighbors keep the noise down. Finally, as I sit on the balcony memorizing Tagalog vocabulary, I have the feeling that now I’m really beginning to settle in.