Before the Covid 19 lockdown, Benjie Abad, a.k.a. Mang Urot, was operating a soup kitchen he called Karinderia ni Mang Urot. He and his wife, younger daughter and assorted volunteers were feeding the needy three nights a week, sometimes in a bank parking lot, sometimes at the Abad home in a typical middle class subdivision in Metro Manila.

Benjie and I spoke via Facebook Messenger when he was in Quezon City and I was in Antipolo. Thanks to KMU for the photos.

It was almost eight years ago when you set out to feed the hungry. Can you tell me what inspired this?

It was late April 2012 and I was walking home from my call center job here in Quezon City. In front of a Kentucky Fried Chicken, I saw two kids who looked poor. They were eating fried chicken which I assumed they had taken out of a nearby dumpster. This saddened me so much I decided to spend my life feeding the hungry.

Two weeks later I had it going. When I started it was just on Saturdays, but eventually it grew to Friday, Saturday and Sunday. I have also put up a shelter for the homeless inside the walls around my home with a long kitchen in what used to be my driveway. So we’re feeding people on weekends, but on weekdays they can go to my house any time of the day or night, knock on the door, and we feed them. 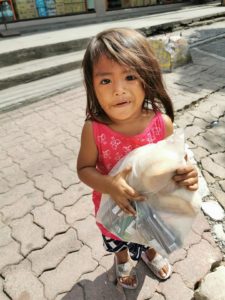 So you’ve been doing this now for eight years.

We have an anniversary on May 5.

For quite a while you were setting this up in the Bank of Commerce parking lot on the corner of Quezon Avenue and Examiner Street. This was in the evening well after the bank was closed.

How many people were coming?

An average of 50 to 60 from January to August, but from there would be a steady increase from September to December, sometimes up to 100 or150.

Why are there more people in December?

Okay, so can you describe for my readers how you manage to keep order? I mean, I’ve heard that in some soup kitchens when food is put out on the table utter bedlam follows. What do you do?

I practice “tough love” in establishing discipline. They have a mindset that comes from life on the streets, a focus on survival. If they see they can manipulate you, they’ll take advantage.  But probably because I was a bad boy when I was young I know the psychology. They see it in my eyes, and they know they can’t push me around. I guess my earlier lifestyle was actually a blessing. The soup kitchen recipients know that I know how they think and act. Eventually, because I was taking care of them I gained their respect. Now they are very cooperative and very respectful and orderly.

Also, if they can see in your eyes that you know how they think and act, then they feel understood. You always behave that way, and so do the rest of the KMU folks. There’s no looking down on anyone.

Now you get people all lined up?

If there are just a few volunteers on a given night, I get people to line up in front of the tables where the food is laid out. But if there are more than twenty or thirty volunteers showing up, then the beneficiaries sit down in a line and the volunteers bring them their food. So whether they stand or sit in a line depends on how many volunteers show up.

Yes, each group has its own line, the men, the women, the elderly and the young people. It’s a point of order for them to find their own group.

You also have parents with small children. I don’t know why that seems especially sad. I remember one old lady who was there several times, and each time we interacted with each other. The last time I saw her she had a bad cut on her cheek. I think she was the one who had kind of a box on wheels.

We call that a wooden cart. Sometimes people use that for collecting plastic to sell, and then at night they use it as a shelter.

Then you have someone who says a prayer before the meal.

Before the lockdown, was the food kitchen still in the bank parking lot?

When there are just a few people we go to my house. I open up my property and my home. I have constructed a long folding table along my driveway where we can accommodate about 40-50 people. So usually on Fridays and Saturdays we have them here inside our home compound.

Okay, now what do the neighbors feel about this? Do they object?

Yes. The homeowners’ association objected and sent a complaint to the barangay the smallest government unit], which forwarded the complaint to me. If the letter had just talked about peace and order that would have been understandable, but it included strong words for bodily functions. This is not how to talk about a human being. These people I take care of didn’t urinate or defecate in front of my neighbors even before I built a bathroom for them. Most of my neighbors are insensitive to the needs of these people. Only three or four support KMU. I told the barangay I wouldn’t stop. They said, “We had to forward the complaint to you, but you’re not violating any regulations.”  Two or three weeks later the city government invited me to come in for a commendation. Once I’d been honored by the city, there were no more complaints.

As I remember, you had a restroom built in your compound because there was no place for the homeless to use the toilet.

Yes, to use the toilet they’d have to pay five or ten pesos [10-20 cents, a lot for someone living on a dollar a day or less]. Sometimes if they go to the churches they are not allowed to use the comfort room. Once after people left a church comfort room they were arrested and brought to the the Department of Social Welfare Development—just for that. 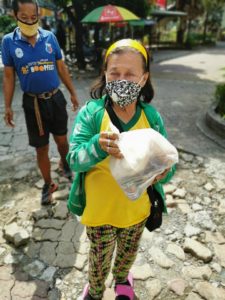 Yes. The barangay government also does not allow these people to use the facilities in their halls—just because they are not registered, and they are not voters. The churches don’t see them as donors. This attitude leaves these people in a sorry state, which was why I decided to build a comfort room inside the compound.

You also have a place where people can sleep.

Yes ,the classroom doubles as a nighttime shelter for  women sixty years old and older.

What’s the classroom for?

I imagine lessons are not going on now, right?

Yes, because the kid are now teenagers. We’re waiting for the next batch of young kids to educate in the classrooms.

Now, when the lockdown started on March 9, what did you do?

Yes, social distancing meant no gatherings of more than four people, so we couldn’t do the soup kitchen anymore. The beneficiaries walked to different places around my community, and every three or four days I drove around with relief packs for the homeless and distributed them. The first two or three times I did it alone. But then donations came in, and I thought “What will I do with all this money?” I asked some KMU volunteers who have motorcycles if they could help. I also got two people from delivery companies that use motorcycles. Two weeks ago we had five people making deliveries. Now we have six. Last week we distributed around 350 packs, so altogether probably 1,200 relief packs for the homeless inside Metro Manila. 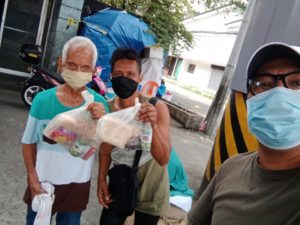 What’s in the food packs?

How do the homeless cook the rice and noodles?

The people come to particular destinations?

That’s kind of like the way they used to gather in the bank parking lot a couple of hours before the food came.

Yes, but now they’ve scattered in different places so I have to go look for them.

The government has no program for the homeless.  There’s financial aid for residents and the voters, but because these people have no residences and are not voters and have no addresses, they are not included in the benefits. That’s the reason I concentrated my efforts in helping the homeless. They seem to have been really abandoned.  That’s a very, very sorry sight.

Now, I know that you’re just dropping off food and not having a conversation, but do you have a sense of what people are feeling about the lockdown?

Well, the conversation is like, “Hi, hello, this is for you.” So almost zero during this pandemic. What gives me strength is seeing their faces light up, the big smiles and the sense of relief. That’s enough for me to go on serving these people.

What’s your feeling about how the government is handling the pandemic?

I’m not going to spend my time analyzing and asking questions. I’m here to help. I’m not interested in criticizing the government.

Well, criticizing the government would get in the way of what you’re trying to do. 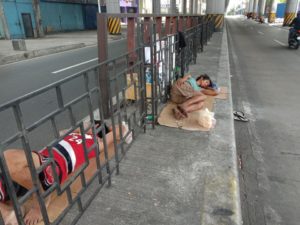 . It would just take time without yielding any results.

So there are no barriers, as long as you’re staying in Metro Manila

Yes, so far, as long as I have the quarantine pass and don’t violate curfew hours, from 8 p.m. to 5 a.m.

Where do your volunteers come from?

From all over Metro Manila. Some from the provinces, but now we need people from Metro Manila to distribute food here. Then also donors come from the Philippines, the US and Australia. With the start of the pandemic the donations to KMU were pouring in. I make sure that all donations are used to support the homeless in Metro Manila. Usually people donate money, time and talent. Right now the only talent we need is the ability to get around the city. 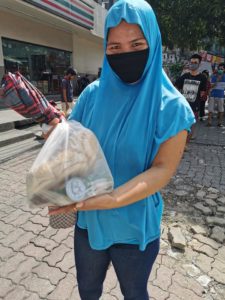 No, I meant from what organizations. Some of the KMU volunteers were in other organizations before they came to you, right?

Yes, but I don’t ask them where they came from. I just consider them KMU members.  So I have no idea.

Now, I understand that you don’t solicit donations, but if somebody wanted to contact you, how would that person do it?

It wouldn’t be like organizations which have a donation button on their Facebook page. People would have to message me on the Karinderia ni Mang Urot Facebook page to get the bank account information, and I accept donations only when I know people trust me to use the money as it should be used. I don’t want KMU to be indebted to anyone. So everyone should be helping wholeheartedly. That’s what I want KMU to be. 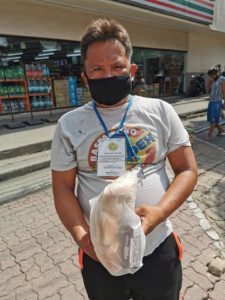 You have also talked in terms of people helping each other. This is a two-way street.

We KMU volunteers and supporters help the poor by feeding them, but in doing so our spirits and souls are being fed because we are doing something good. In fact, the donors and volunteers are benefitting more because it’s our spirits that are being uplifted by the opportunity to do good to our fellow men.

After the interviews Benjie sent a postscript:

I just received a message last night about my friends , the former illegal settlers in Makati  who were relocated far south in the Province of Laguna . These 50 families are in need of food as are 25 sea-farers stranded in a Manila lodge need assistance as well. I’m still wondering how to help them , as KMU funds are depleted:

Colgate features Karinderia ni Mang Urot in their Ad campaign for the conservation of water.This Video was published by CNN Philippines on their website on October 2017.

Posted by Karinderia ni Mang Urot on Wednesday, 9 May 2018 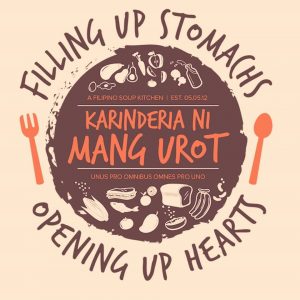